Julie James is back with her new novel, A Lot Like Love. Jordan Rhodes is invited to all of Chicago’s best parties, but there’s only one the FBI wants to crash. She agrees to take Agent McCall as her date to get her brother out of jail. But when the mission gets botched, requiring their “relationship” to continue, it starts to feel less like an investigation-and a lot like something else.

Jordan Rhodes seems to have it all: money, fame, beauty, and her own successful business doing what she loves, introducing people to exceptional wines. But her twin brother Kyle is serving hard time after crashing Twitter in an emotional reaction to his girlfriend’s very public breakup with him. The FBI offers to commute Kyle’s sentence to time served if Jordan cooperates by getting one of their people into a very exclusive charity fundraiser. James’ sassy, suspenseful sequel to Something About You (2010) exhibits her trademark sizzle and wit while focusing attention on another FBI undercover agent assigned to ferret out the secrets of Chicago’s Mob. James pits Nick McCall’s bad-boy appeal against Jordan’s warm heart in a classic romance trope and concludes with tantalizing hints about future installments set in the same intriguing venue. –Lynne Welch 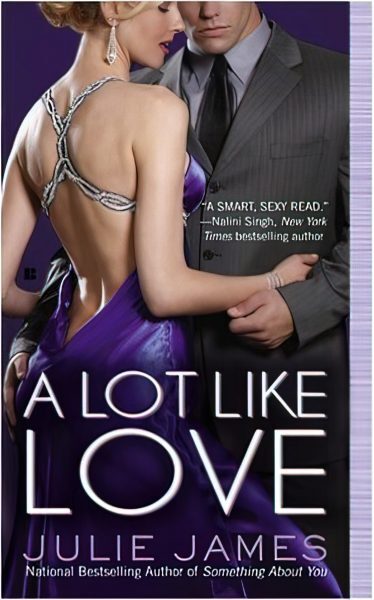 I’ve read quite a few Julie James books by now, and I must say this is probably my favorite and most definitely the only one with a likable female lead. As I’m sure you’ve heard me say time and again, Julie James tends to write high-brow romance novels where the female lead is some fancy pants lawyer who makes $250,000 + a year and drinks expensive wine into $1,500 a pair of designer shoes and blah blah. Let’s just say the more you read Julie James’ books, the more you kinda don’t like her as a person. She seems disconnected from the reality of most of our lives. She’s well off and kind of a snooty, highfalutin bitch, and it comes through with the main characters of all of her books. That is except for this one.

Her lead character in this book isn’t like that at all. In fact, despite being an heir to a billion-dollar fortune, she’s very down to earth and has a good head on her shoulders. She doesn’t talk down or treat her staff like trash or is disrespectful to them, which is an all too common trait in Julie James’ books. The typical sizzle and witty banter are present as with all Julie James books, but what makes this book stand out is the true passion and heat between two very different kinds of people, and more importantly, they are relatable and likable people.

This book was great and an absolute must-read.

Right now, there are currently 177 others online, just like you!