A man from Texas tricks his wife into a divorce

Just when you thought you’ve heard it all, a man from Texas divorces his wife without her knowing by forging the paperwork.

A man from Houston, Texas wanted out of his marriage and instead of going through divorce proceedings, he faked his wife’s signature on paperwork in turn ending their union without her knowledge. 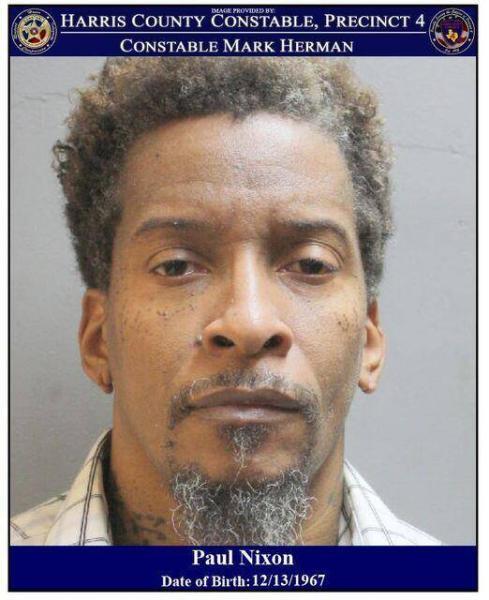 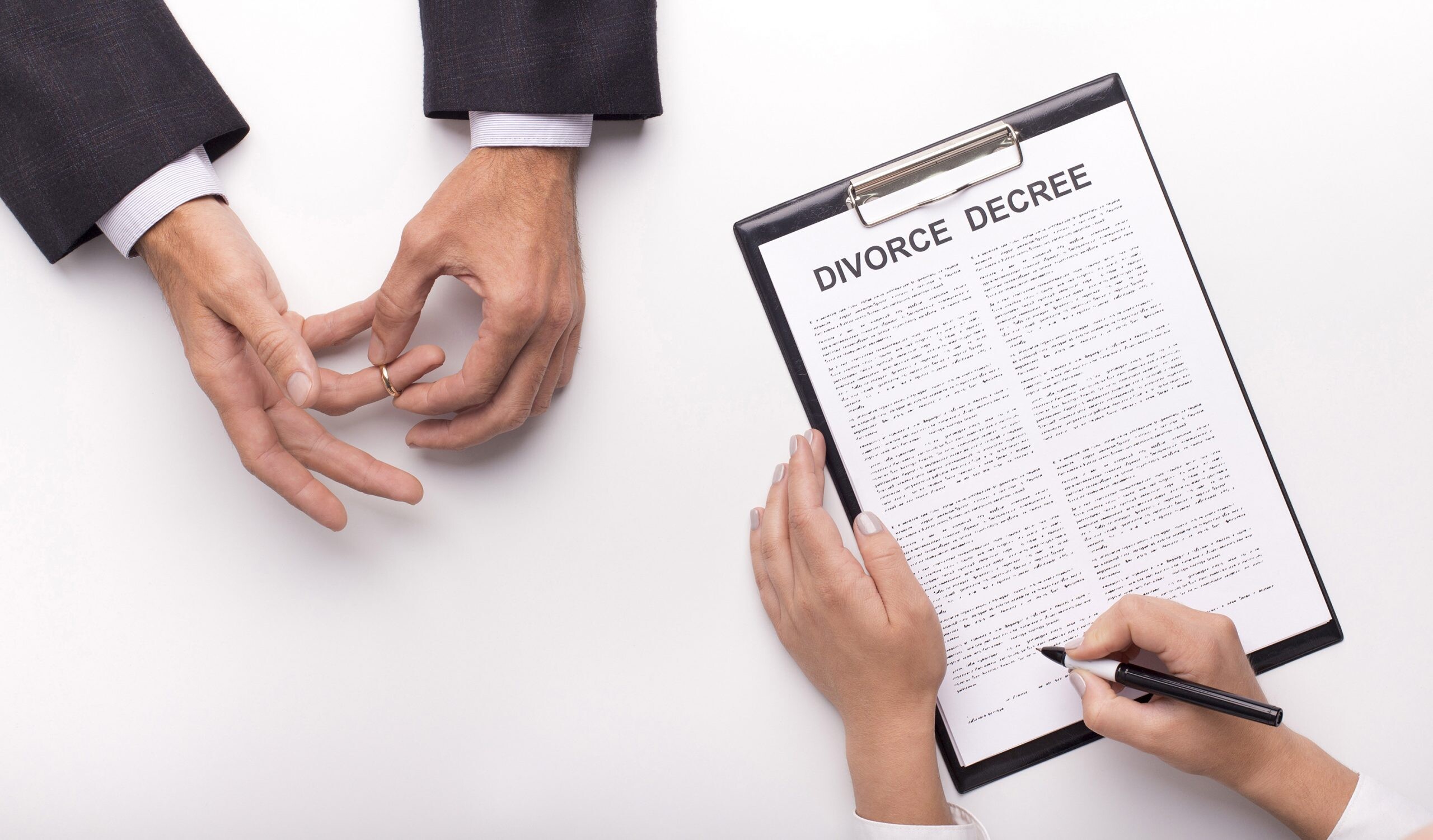 Paul Nixon submitted forged documents and false information to a Houston district court. Paul Nixon also reportedly committed perjury when testifying in court during a divorce hearing. The divorce has been tabled due to the perjury and fraudulent documents.

The constable’s office started the investigation after Mrs. Nixon informed officials of the divorce that occurred without her knowledge.

Harris County Constable Mark Herman spoke with a local Houston news outlet and said that a search for Mr. Nixon is underway as he is now wanted for aggravated perjury.

“We have teams out looking for him right now, I can tell you,” he told the station. “And we have an idea where he’s at. So hopefully, he’ll turn himself in. If not, we’ll catch him. Just a matter of time.”

A conviction for Aggravated Perjury is punished as a Felony of the Third Degree,1 with a maximum possible fine under Texas state law of up to $10,000 and prison time of up to 10 years. 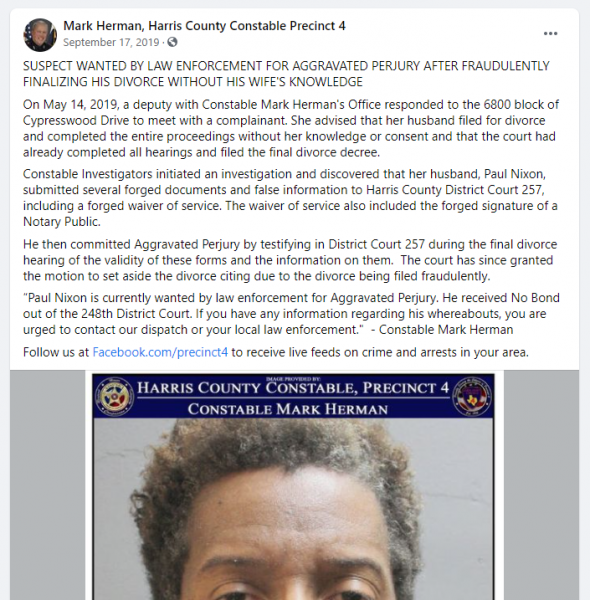 On May 14, 2019, a deputy with Constable Mark Herman’s Office responded to the 6800 block of Cypresswood Drive to meet with a complainant. She advised that her husband filed for divorce and completed the entire proceedings without her knowledge or consent and that the court had already completed all hearings and filed the final divorce decree.

Constable Investigators initiated an investigation and discovered that her husband, Paul Nixon, submitted several forged documents and false information to Harris County District Court 257, including a forged waiver of service. The waiver of service also included the forged signature of a Notary Public.

He then committed Aggravated Perjury by testifying in District Court 257 during the final divorce hearing of the validity of these forms and the information on them. The court has since granted the motion to set aside the divorce citing due to the divorce being filed fraudulently.

“Paul Nixon is currently wanted by law enforcement for Aggravated Perjury. He received No Bond out of the 248th District Court. If you have any information regarding his whereabouts, you are urged to contact our dispatch or your local law enforcement.” – Constable Mark Herman

A lesson this man learned the hard way, you can’t file for divorce without telling your spouse. Divorce by deception is a big deal and very well may land him in jail.

So why did he do it? Well, the 51 year DJ who goes by the name DJ U-Shay, showed up in criminal court with his attorney and his new wife.

“I’m not guilty and I want everybody in Houston to know, that knows me, I wouldn’t do this,” Nixon said. “So we’re going to let the courts do their job and I trust the courts that they’re going to see the proof and evidence that we have.”

Paul Nixon’s attorney was able to ask a judge to change his zero bond to a $25,000 bond. The request was granted. The court had previously set aside the final judgment due to the falsified documents, making him still legally married to Edna. Nixon insists Edna is his ex-wife since he remarried.

“He’s a legend here. He’s a legendary DJ here in Houston. He was actually on tour when he started receiving multiple phone calls, texts about this matter. Got on the first flight here, came out and we approached today for a bond,” said Sterling, who is with the Law Office of Chaunte Sterling.

He claims he is not guilty of aggravated purgery. The courts will decide.

As far as the wife goes, or ex-wife to be, Edna says she never even knew they were headed for divorce. It came as a total surprise to her and she claims that he was living a double life. 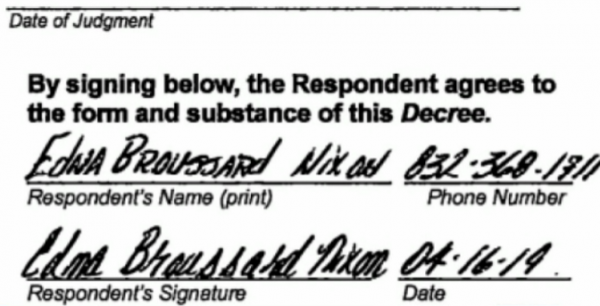 Edna Nixon says that is not her signature on the documents and she went to the police to report the forgery. She even says that he listed her address in a location she’d never heard of. He also gave a false phone number for her. That’s why she was never notified by the court about the divorce.

Paul Nixon filed for divorce on February 15, 2019, in what he claimed was an uncontested waiver divorce. He was awarded the divorce on April 17, 2019, however that family court judgment was set aside once the criminal proceedings began.

A Harris County constable also spoke to the notary whose signature was on one of the documents, and she confirmed that her signature had been forged — and misspelled.

Looks like he’s in a bit of trouble, that all started out with a man cheating on his wife.

A man from Texas tricks his wife into a divorce

Right now, there are currently 665 others online, just like you!