Can you actually find a female who hasn’t faced sexual harassment in their life?

When someone asked women to speak up if they have ever been sexually assaulted or harassed, they didn’t seem to realize it would have been harder to find someone who hasn’t had that experience in life.

To date over 40 women have accused film producer Harvey Weinstein of sexual harassment or assault, but those are just the ones who have come forward. It’s probably in the 100s if not 1000s.

Sexual harassment is something that almost every single woman faces on a regular basis in at least some aspect of her life. No matter how big or small, it doesn’t make it okay just because it happens so often. That’s why when the #MeToo campaign on Twitter started, it was instantly so popular. I don’t know of a single female that doesn’t have some sort of #MeToo story.

People are now asking how did this “open secret” survive for so long? How does something so common, yet so obviously wrong, continue to happen?

I think that because it’s so common people don’t report it because they think it’s not violent or threatening enough. It’s just something they put up with and move on.

In some cases though, it’s not reported because they don’t want to be ostracized or deal with the backlash that comes with outing people in power. Nobody wants to be harassed for reporting being harassed. It’s just easier to shut up about it and move on. It’s crazy how much backlash victims of harassment and/or sexual assault receive for coming forward.

Even when people do report the abuse, they are often not believed. Think how many women reported their abuse by Bill Cosby for the last 30 years. Every one of them was ignored for years – in some cases 30 years. Nobody would believe them. It was only recently when the victims united to tell their stories that people started paying attention. I think to date something like 47 victims have now come forward to speak out against Bill Cosby.

Most people assume that things like sexual harassment and assault are inevitable. They are wrong. Sexual assault isn’t an inevitable male impulse. It’s a monstrous act of violence. I remember sitting there reading this tweet by  Donald Trump about sexual assault in the military. 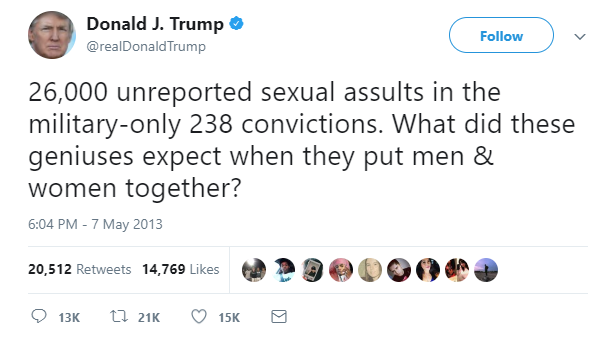 Just because you put men and women together, you should automatically assume that sexual assault is going to happen. Why is that the go-to assumption and when did that become okay?

Actually, it’s never been okay but only now in 2017 has it finally been exposed for what it is. Finally, for the first time in history women can say, this is what we put up with every day and no, it’s not okay. #NoMeansNo.

Just because we want a job, doesn’t give some man the right to sexually harass us.

Just because we want to do some business deal, doesn’t give a man the right to sexually harass us.

Just because we are women, doesn’t give some man – any man to treat us any differently than they would a man in the same situation.

“Friends can have benefits you know.”

That’s what I heard just today from a colleague. That’s not something a man would say to another man, but most men don’t think twice about saying it to a female.

Why is that? Men I asked swear up and down they mean no harm. That they didn’t realize it was sexual harassment. So here are some examples so there is no longer any confusion …

I think most people know by know that coercion (ie: threatening someone that if they don’t have sex with you they will be punished) is wrong.  But a surprising number of men don’t realize that the things I mentioned above are also not acceptable.

A female should not have to go to work each day and dread dealing with male co-workers because of the constant barrage of sexual harassment.

I want to go to work to do my job. I don’t want to hear about your penis or how you banged a girl you picked up at a bar last night and that you think my breasts are hotter than hers.

Okay, I promise I’m done with my rant now. That really wasn’t the point of my article. I just wanted to point out that sexual harassment and the fear of sexual assault is something women face every single day of their lives. It’s not an isolated incident. It’s common practice and it’s not okay.

We shouldn’t have to fear for our safety or tolerate sexual harassment just because men are in the room.

Can you actually find a female who hasn’t faced sexual harassment in their life?

Right now, there are currently 631 others online, just like you!