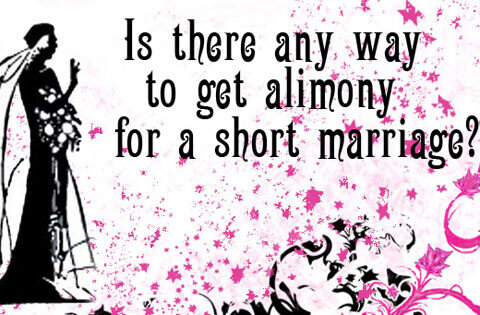 Can I get alimony?

Dear Tracy,  Please help!  My husband left me for a younger girl that he met online.  We don’t have any children but we’ve been together a long time however only technically married for a few years.  I was pretty much a housewife our entire marriage and he made almost all the money.  I did have some money coming in from a part time business I did from home but it was never really more than a few hundred bucks a month.

Money was tight so we only had one car so when he left me I had no car and no real money to speak of.  I then found out my husband who normally pays our bills wasn’t paying our mortgage for the last few months so they want to foreclose on the house.  I can’t even afford a lawyer for help with the divorce.   I know you probably more so than anyone hear a lot of horror stories like mine because you run this website so I was hoping you had some advice for me.  Everything I read said we haven’t been together long enough for alimony.  Do you have any advice for me?  I really could use your help.

Well, the first thing I need to point out is that I’m not a lawyer, and any advice I give you should not be considered legal advice.  The answers I give are based on my own personal experiences and you should always consult a real attorney for legal advice and a CPA for financial advice or a doctor for medical advice.  With that disclaimer out of the way, I can tell you what I learned from my own experience in this area.  Every state has different rules but where I live they have this thing called temporary spousal support.  I too, as you had always heard that you had to be married for 10 years so when my husband left me penniless and like you without transportation to even get a job I panicked.  Turns out what people don’t tell you is that there is an option but only to help the spouse who makes the least amount of money, typically for housewives to get back on her feet during the divorce proceedings.    Basically, the court will order your husband to pay you 50% of his income while you two are working out the details of your divorce.

The quickest I’ve ever heard of anyone getting a divorce in 60 days so at least for two months you will get half of his income and while it may not be much it is at least something.  However typically in cases of ugly divorces where one spouse cheats, it won’t be a quickie, clean divorce so for as long as that drags out, you are getting 50% of his income, as ordered by the court.

Temporary spousal support is not alimony or child support.  It is from my understanding a temporary order from the courts meant to help one party recover from a divorce, to help them get back on their feet with they suddenly and typically without much notice lose the majority of their income, as within your case because your husband just took off.

So while that is the good news, the bad news is, you will have to figure out a way to hire a divorce attorney and although typically the court can get your husband to pay all of your legal bills, at first you’ll have to foot the upfront money and that could be anywhere from $1500 to $8000, depending on if you have children or not.

My husband and I have no children but we had some past tax debt that he didn’t pay and potentially some hidden assets (as in he got an inheritance and was trying to hide it from me) so in the end, I had to pay upfront $3,000 to the divorce attorney.  It seems like the more complicated issues you have, the more upfront they want.

If you don’t have the skills to get a job you will need to work that out with your divorce attorney.  Him paying for your re-education to return to the workforce will be part of the divorce settlement.   If you need support after the divorce you’ll have to get him to agree to it on your own or with your lawyer because like you said, you haven’t been married for 10 years and without that, most courts won’t just give you alimony.

Since most times you can get your husband to pay all divorce-related legal fees sometimes family members will loan you the money you need upfront to get things started.  The faster you get this process started, the faster you can get some money because the courts will order temporary spousal support to begin almost immediately and again to last the entire length of the divorce proceedings, no matter how long it drags out.

The only thing I would warn against is don’t shack up with some other guy during your divorce.  I read online about one girl who did that and as such the husband was able to go back to court and argue that she is living with him as a common-law wife and as such she lost her temporary spousal support.  Anyway, I’m not a lawyer so I can’t exactly explain how all of that works but do just be careful.

Can I get alimony?