Everything in Samantha Conners’ life seemed to be in a holding pattern. Her sailboat racing season had fallen through, and she was stuck in a dead-end job that barely covered the bills. If it weren’t for the fact that her sister and niece depended on her, she would have never been out on the water the day the billionaire’s boat ran her over.  Robbie Saunders is convinced that he is the screw-up younger brother of billionaire Jack Saunders.

One of his biggest rules was to never go out drunk on the water, but with the impending death of his father, he took the boat out after drinking to try and gain some clarity. Instead, he ran over Sam and barely managed to save her from drowning.  While the two had been childhood sweethearts, time and distance had made them into different people.

When fate crashes them back together, Robbie finds the fiery young woman to be the person he needs to give him motivation and direction. Robbie is growing into the man she always knew he could be for Sam. A love blossoms and grows.  But what fate can give, it can also take away. A storm during Sam’s career’s biggest freshwater sailing race changes everything. Will Sam and Robbie find a way to overcome the storm, or will the two only have memories of freshwater kisses? 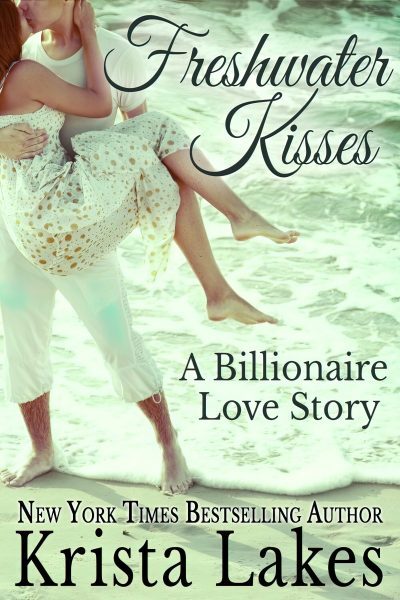 This book was quite popular and ranked highly on the sales list from Amazon. Seeing how popular it was and considering it also had no bad reviews, I mean, out of 40, you would think at least one person would have something bad to say, but surprisingly they didn’t. I mean, even books that have just left me floored at how great they were have gotten a handful of bad reviews, but this book didn’t have even one. So I figured, wow, I am going to be in for a great read. I couldn’t wait.

There is a vast difference between a fictional story and all-out fantasy. While a pleasant read, this book was most defiantly one of those that make you stop and roll your eyes more than a few times, knowing that reality long ago went out the window.

The book starts out strong with a young girl in junior high saying goodbye to her best friend and sailing partner. Her family was moving away, and she wouldn’t get a chance to see him again. 11 years later, they meet up again, and you just can’t wait to see what will happen. Only the book takes a few strange moments where it’s more like the author is telling you about what she is daydreaming about. It’s just weird and awkward, not the slightest bit set in reality.

It’s a sweet story, just those few awkward moments just took you out of what could have been an amazing story. Another thing that bothered me was how quickly things progressed. They went from childhood best friends to not seeing each other for 11 years, and then bam, they are automatically just in love and dating after that one reunion? Really? Okay, sure, she fantasized about him for years when they were apart, but the reality of it was … well, let’s just say a lot of things in this book aren’t really set in reality.

The main character has a very unapologetic attitude toward her boyfriend’s money. As a billionaire, he does try and lavish her with special gifts, but a normal girl might at the very least feel a little bit of humility or attempt to turn down gifts like a boat, spur-of-the-moment trips, fancy helicopter trips to New York City for dinner, thousands of dollars of dresses for her niece, etc. And keep in mind that all of that took place within days of reconnecting.

I get that we’ve all had daydreams of meeting some billionaire, and they whisk us away, pay off our debts, buy us boats, and so on.  But that doesn’t necessarily make for the great storylines of a romance novel. When something in a book clearly isn’t set in reality, it can take the reader out of the fictional world you are trying to create, which takes away from the overall enjoyment of your story. There could have been so many different ways to approach the issue of his wealth without making the girl seem like such an unapologetic money-grubbing whore. We all get it, she likes his money, but dang, can’t you at least make her feel bad about it at least a little bit? I mean, she didn’t even think twice about accepting a really expensive sailboat from him. Could she have not at least put up a fake, for good manner’s sake, no I can’t take this boat, it’s too much, I can’t?

What kind of person is just so okay with taking things from people and people you should have cared about for all those years? It’s just not realistic and seems so off-putting to me.

Now all of those negative things aside, if you can get past those things, it’s a sweet story and a pretty decent read. I wouldn’t say the best story ever, but this story has far more passion and heartfelt writing in it than others I’ve read in this genre as of late.

Is it worth a read? Absolutely. It’s not too hard to overlook a few of the book’s obvious flaws and still enjoy a sweet love story.

Right now, there are currently 189 others online, just like you!