I normally write to you about issues of love or men but today I am going to share with you a story of another kind.  Today I am going to post a warning for you so that you too won’t have the most horrible experience that I have had.

DO NOT USE MAIDSONDEMANT.NET – THEY SUCK!

I found an ad for MaidsOnDemand.net on Craigslist.  They were offering an amazing deal, they would clean your entire house for $49.  How great is that?  Since my previous housekeeper cost me $100 a day, paying only $49 was a great deal.

Their website claims they are licensed and bonded, a member of the BBB and they offered a 100% satisfaction guarantee.  Sounds good, right?  Oh, how wrong I was. 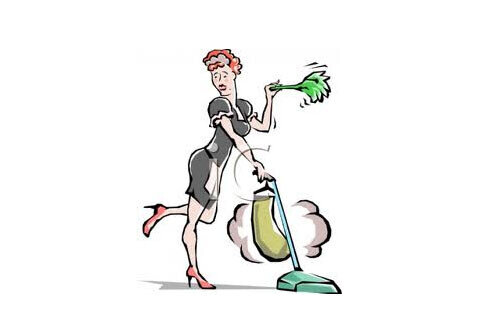 Their website showed pretty, happy, young white maids leaving you to believe that what you are hiring are legal.  The reality of the situation is however they have several “teams” and of the 3 different teams that came to my house, that was 8 different people, only 1 of them was legal.  However, hiring illegal immigrants to clean my house quite honestly wasn’t that big of a deal to me.  Sure it made me a little concerned but at the end that would be the least of my worries.

The first day they decided the 3 rooms they had to clean in my house for the $49 offer were far to dirty so instead they charged me $89.  They said next time it would be cheaper since they wouldn’t have to work as hard.  I agreed.  What could I do?  They had already started cleaning.  When they left I noticed a few problems right away.  They made the bed with dirty sheets and they put 5 dirty pans in the oven instead of washing them.  They loaded the dishwasher full, over full actually, ran it but didn’t unload it.

Remember earlier how I said they had a 100% satisfaction guarantee?  Well, it turns out that means that they promise next time they come out they will do a better job.

The next week they sent out a different team of girls, this time it was three instead of two like the first time.  They had to clean the kitchen, take out the trash, vacuum the living room, and change my sheets.  They were at my house for about 2 hours.  They charged me $69.  I would later find they didn’t take out the trash, I would SMELL that they ditched the trash bags behind some stuff in my garage.  It’s a smell to this day I have yet to get rid of.

The next week came but this time prior to their arrival the owner said I only had to pay $59.  He put that in my email receipt as well.  Again it was just the three rooms plus taking out the trash.  Now keep in mind I live by myself, and I don’t really cook and they come every week so you can imagine that the house couldn’t have gotten all that dirty in a week’s time.  This time the team also had 3 people in it.  They were at my house less than 2 hours and during that time she loaded all the dishes into the dishwasher without even rinsing them.  She stuffed it so full she actually broke a piece of it off trying to force it closed.  I wouldn’t know this until after she left as she hid the evidence.   They made my bed with dirty sheets and again about 6 pans were hidden in the oven, dirty pans mind you, not cleaned and put there for storage as she would later claim.

As they were leaving I paid the $59 and she came back in the house demanding $10 more.  I’m like excuse me?  This is what he told me to pay.  She could barely speak English but she claimed I needed to pay the extra $10 for taxes.  Taxes?  You don’t pay sales tax on service and even if you did, sales tax on $59 isn’t $10.  She kept repeating, taxes, taxes – pay now, pay me now or I no leave.  Taxes! Taxes!  Pay me $10 now.  I want money now!  I finally just wrote her a new check for $69 and decided that I wouldn’t be giving them another chance in the future.

All of that still wasn’t the worst though.  I would find out in a few days that they took the dirty towels I had gathered up on the floor to wash, one of which I had used to wash my long-haired cat and dry her with and folded them up and put them up with my clean towels.  I had no idea until I got out of the shower recently and dried off with the dirty towel, the one from my cat.

DO NOT USE MAIDSONDEMANT.NET – THEY SUCK!

And as for their claims of being licensed and bonded, turns out that isn’t true either.  You can’t license and bond employees who are illegal immigrants.  And they are also not a member of the BBB and as far as their testimonials go.  Turns out those are fake as well.  Found the exact same ones from a company out of Connecticut.  So I began to look a little closer and it turns out, I found the exact same, word for word testimonials on 1,040 other maid related websites throughout the United States.

MAIDS ON DEMAND .net is a scam.  Do not use them!

Update:  I had originally made this post in May of 2011.  The owner of the company has recently contacted me rather upset and demanding that I remove this post.  He has sent message after message to me in an attempt to harass me for speaking the truth.  He is trying to make legal threats against me but I  know that I can prove what I said.  I know the law too and it’s not defamation if it’s true!  All I said was 100% true to the best of my knowledge at the time the services were rendered.  So he can kiss my booty.  I will not back down.  I will not allow some jerk to threaten and harass me in an attempt to keep my quiet.  Their services were horrible.  They didn’t speak English, they were the worst maid service ever.  But beyond that, they flat out lied.

I searched the BBB website for this company and found no listing.  This means they are not accredited by the BBB despite previous claims they have made to the contrary.  They are not  “A-rated BBB!” as they claim as they have no BBB listing at all.  That’s lie #1.  Any person in the world can search the BBB website and find this out for themselves.

Lie #2 would be that they guarantee satisfaction.  That is not true.  I was not satisfied.  I could not have been more satisfied.

In one of their 3 visits to my house, they had 1 person who spoke English.  She was a young girl, maybe 18 or 19 and while at my house working she took a personal phone call on her cell and I overheard her say that her co-workers were illegals.  Beyond that, if you can’t speak any English, how can you pass the citizenship test?  So even if hadn’t heard that girl’s phone conversation talking about her co-workers being illegal aliens, common sense tells you that if you can’t speak English there is no way you can become a citizen.  I did work for an immigration lawyer once, that citizenship test isn’t easy.  When I asked the owner about this, specifically because I didn’t understand how they could be bonded and insured if they were illegal he started to curse at me saying I was stupid and didn’t know what I was talking about.  Later on he changed his story and say they were no citizens but had work permits.  While that could be true, how do I know?  He could have just said that in the first place.  Changing one’s story several times is typically a sign you are lying.

So in the end I stand by my story that MAIDSONDEMAND.NET SUCKS.  They did a horrible job and they lie.  They made my bed with dirty sheets.  They folded up clearly dirty towels and put them in with my clean towels.  They hid trash in my garage.  They hid all the pots and pans in my stove so they didn’t have to wash them.  They broke my dishwasher and then tried to hide the evidence!  They didn’t stand by their promises and they were not accredited by the BBB as their ad implied.

But you want to know the killer in all of this?  Remember how their ad claimed, “satisfaction guaranteed”?  Well after the 3rd and final time, the guy said to me, that all of this was my fault.  That the girls that worked for him didn’t want to return to my house.

I didn’t speak a single word to these people negatively while they were cleaning.  I went out of my way to be nice and super polite, offering them drinks, etc.  So to have this jerk blame this all on me – as if somehow it was my fault that THREE of his teams did a bad job because of me was just too much.  This guy is just ridiculous and now is making threats against me in an attempt to force me to not tell you all the truth.

Oh and so we are clear here … I saved the original ad with the false claims and I also took pictures of the pots and pans in the stove, the dirty towels in my linen closest and I saved what they broke on my dishwasher.  So go ahead and bring legal action against me.  At least I’ll get to lay counterclaims for the damages and fraud.  YES, FRAUD.   What you did was fraudulent, which is illegal.  “Wrongful or criminal deception intended to result in financial gain.”

I also have copies of your fake testimonials that appear on several other maids websites throughout at least 11 different states.  Every site has the -exact- same testimonials, word for word.  Posting fake testimonials is also a version of fraud.  I could continue but I think at this point I’ve more than made my point.

P.S. Continuing to send me letters harassing me, calling my website crap, saying it gets no traffic and I’m stupid, really doesn’t do you any good.  It only further proves my point about your professionalism.  But I do thank you for all of those letters and messages.  My lawyer will no doubt enjoy reading them.

2020 Update: I’m happy to report this scam of a company is now out of business!