A Royal Pain is the 2nd book in the The Royal Spyness series written by Rhys Bowen. 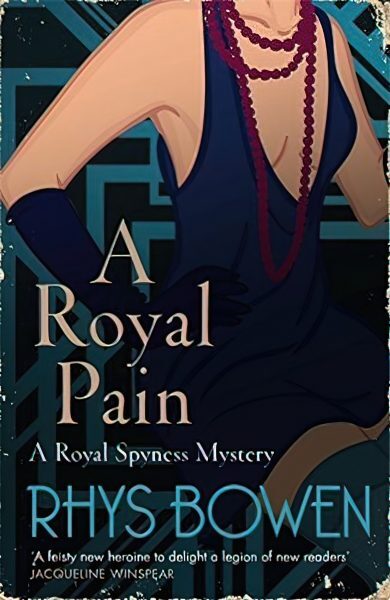 The Queen of England has concocted a plan in which penniless aristocrat Lady Georgie is to entertain a Bavarian princess and conveniently place her in the playboy prince’s path, in the hopes that he might finally marry. But queens never take money into account. Georgie has very little, which is why she moonlights as a maid-in-disguise. She must draw up plans: clean house to make it look like a palace; have Granddad and her neighbor pretend to be the domestic staff; un-teach Princess Hanni the English she’s culled from American gangster movies; cure said princess of her embarrassing shoplifting habit; and keep an eye on her at parties. Then there’s the worrying matter of the body in the bookshop and Hanni’s unwitting involvement with the Communist Party. It’s enough to drive a girl crazy.

GET A ROYAL PAIN AT AMAZON

I’ve never been a big fan of historical romance novels but after falling in love with the romantic thriller Her Royal Spyness, I knew I had to pick up the second book in the series.

This book absolutely didn’t disappoint. The writing is over the top — truly fantastic. You really find yourself getting wrapped up in the story and there are no major mistakes that draw you out of the moment.

I can’t think of a single thing bad to say about the book. The only thing I might mention is that the publishers only release one book in the series per year so when you finally get caught up with all the books in the series you might find yourself waiting a longggggg time for the next one.

Another thing I like is the little bits and pieces that are historically accurate. It touches on the romance between Wallis Simpson and Edward, the Prince of Wales. It’s so artfully done too.  Even though the entire book is a work of fiction, you can just really see her being like that.

When the story finally wraps up you really find yourself surprised. I didn’t see the ending coming but I will say looking back now, I should have. Little hints were there all along. I can’t believe I didn’t catch the bad guy sooner than I did. It really was a great story that you just flat out can’t put down.