Bad Night is an adult romance novella by Kelli Roberts, which is now also available in audiobook format. 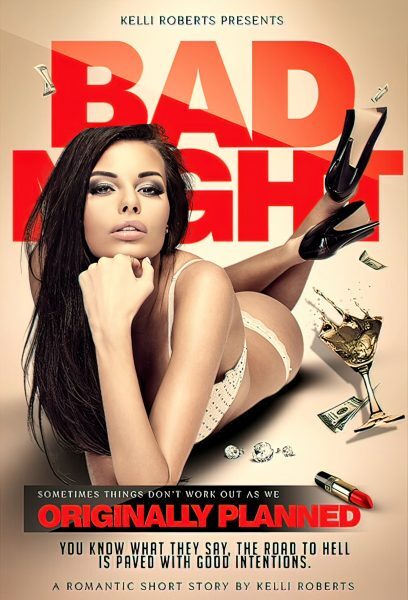 Sometimes things just don’t work out like you thought they would. Guess that’s why they say that the road to hell is paved with good intentions. This is something Alison can relate to. Just 24 hours ago she thought her life was perfect and now everything has changed.

GET BAD NIGHT AT AMAZON

I don’t normally read short stories like this one because quite honestly they are normally not worth reading. This one, however, caught my attention with the cover and then I realized, I had a read a book by this author before, which I guess is why Amazon suggested it to me in the first place.

Bad Night is basically a day in the life of a girl named Alison. I don’t want to reveal too much about the storyline and ruin the surprise for you but let’s just say it’s absolutely not going where you think it is.

Alison lands a great new job. She’s so happy and thinks everything in her life is going well. It’s her anniversary and she is going home early from work that day to prepare a special dinner for her and her boyfriend. She isn’t sure but she thinks he might pop the question that night.

She gets home to find out she wasn’t alone. She follows the strange noises she was hearing only to get one hell of a surprise.

Again I don’t want to ruin it for you, but I will say the end of the book makes the story! I never saw that coming, not in a million years.

I highly recommend this book. You can bang it out in no time, it really is a rather short read but well worth your time and considering it only cost a buck, you can’t go wrong.

I will admit, after reading this book, I might have changed my mind about trying out some short stories. This one really hit the mark.

Maybe there will be some other ones out there too so for now at least, I’m going to check out a few more shorties and I’ll let you know how it goes.

** Update: I recently found out the book was updated to include an additional 6 new chapters. I absolutely loved the first three in the book so I was hoping the author didn’t change that and luckily I found out she didn’t. The new version of the book starts out as before, with the first three chapters as they originally were.

As you might imagine she was a little gun shy about moving forward with another relationship and probably wouldn’t have considered getting back out there again, even 3 years later if her friend hadn’t tricked her into it.

The newest part of the book follows Alison as she goes to spend two weeks at a cabin in the woods with a friend from work, who needed to go look after her family property and see to some much-needed repairs.

The friend from work, Allegra brings along her boyfriend Zander and his friend Croccifixio (Cross for short) to actually do the hard labor.

The story took a unique twist from the original three chapters and led Alison to a place in her life that you hated to see her in. Alison is a likable character and you don’t want to see her suffer, so when she meets Cross, you can’t help but want them to get along.

She deserves her happily ever after and what better way to get it than with a gorgeous hunk of a caveman like Cross.

The two are great together and I loved how the new updated version of the story ended.

Although it’s no longer a short story, it is still very much for mature audiences and falls well within the adult romance category. Let’s just say starting at chapter 7, and all the way to the very end, things get quite heated!

Right now, there are currently 14 others online, just like you!