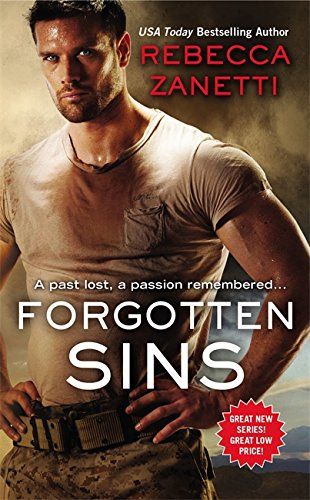 Forgotten Sins is a contemporary romance novel by Rebecca Zanetti. This book is the first book in the Sins Brothers series. Actually, it’s more of a romantic thriller. I wouldn’t go as far to call this a military romance, but it does involve some aspects of military life.

GET FORGOTTEN SINS AT AMAZON

The story starts off with four brothers, actually three, since one had died, who were all genetically engineered to be special, superhuman. Not so superhuman that it would be paranormal, but still superhuman enough to be kick-ass.

The youngest brother Shane Dean is who this story is about. Two years ago he left his bride, Josie, never to be seen or heard from again. After so long, she went to a lawyer to prepare the divorce papers and then delivered a copy to the military base, his last known address.

Josie never knew why her sexy husband left her, but she assumed that he went back into the military, the boredom of normal married life, not being enough for him.

But when he shows up two years later with amnesia, she’s forced to face the truth, that despite the time she is still very much in love with him.

It’s hard to explain how a member of a secret black-ops military unit, genetically engineered by the government to be perfect soldier could make the mistake of falling for a civilian, but then again, love never really makes sense, does it?

The heat between the two main characters could burn the pages of the book. There is obvious love between them, even if it’s a relationship that just can’t work. The book description is perfect. He’s the one man she can’t have and she’s the one woman he can’t resist.

I strongly recommend this book. It’s a great read.