Review of Inception: The Marked

Inception is a Young Adult paranormal romance novel written by Bianca Scardoni. This is the first book in the Marked Saga series. 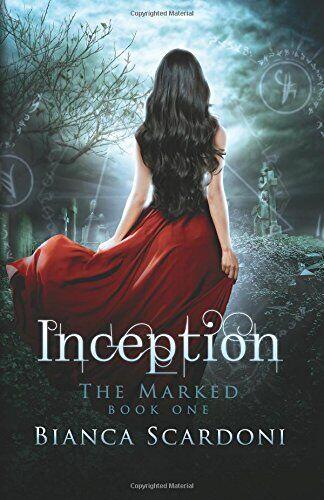 Be careful who you trust, for even the Devil was once an Angel.

My name is Jemma Blackburn, and I have a secret. I know vampires are real. I watched one murder my father, eight months ago, and even though they tried to convince me it didn’t happen—that I’d lost touch with reality due to the trauma, I know what I saw was real.

Hollow Hills is now the place I call home. It was supposed to be my chance at a normal life. My chance to bury my secret and start over. But everyone around me is keeping their own secrets, whispering lies into my ears like promises, and one of them is about to turn my entire world upside down.

I’m the devil they fear and the angel they crave.
Only problem is, I don’t know it yet.

GET INCEPTION AT AMAZON

If you’ve ever seen Buffy The Vampire Slayer (the series not the movie) then you are probably more than familiar with the storyline of this book.

Buffy, I mean Jemma is a Vampire Slayer.  Like Buffy, she was born that way and came into her slayer powers late in life, so when it was her time to fight off a wicked blood-sucking demon, she was behind in her training.

In Buffy the Vampire Slayer, Angel was the Vampire with a soul. This book has that too, his name, however, is Gabriel. Yep, Gabriel, the most famous of all angel names. LOL

No, I’m not being funny, that’s actually really a character in the book. Only unlike Buffy, Jemma doesn’t fall in love with her Vampire with a soul, she does sort of have the hots for his vampire brother Dominic, only when he almost kills her, Jemma’s feelings for him quickly dissipate.

Jemma’s love story is actually with her Keeper, named Trace.

In Buffy, it was Giles who was her “Watcher”. In Buffy, he was way older but in Inception, her Keeper was young, her age with his own powers and paranormal backstory.

Buffy, I mean Jemma has an older sister who is also a vampire slayer, only Jemma never knew. Now here is the part of the story that really bothers me.

The book begins telling you how Jemma’s father died 8 months ago. She was sure her father was killed by Vampires and so instead of saying, hey obviously this poor girl who lost her mother when she was like 2 years old and just lost her father is in shock and grieving, they put her in a mental hospital. Fast forward 8 months and she’s now getting released and being sent to live with her rich uncle who lives in some small town in the middle of nowhere.

Almost immediately she finds out through her uncle that she was born into a family of powerful vampire slayers. Her mother was one and didn’t leave when she was a child but actually was killed. Jemma found out her sister was a vampire slayer too. Oh, and her uncle was on the council that oversees these sort of paranormal activities.

So why in the heck did they leave that girl in the hospital for the last 8 months letting everyone, including herself, thinks he was crazy because she saw vampires murder her father?!?!!?!?!

I mean I get it if they were going to try and keep it a secret, but almost right after she arrives the big secret is revealed that vampires are real. So why did they do that to her?

Her own sister knew so why did her sister not speak up and take care of her? This is all just crazy! That part of the story just doesn’t make sense and really really detracted from the overall storyline for me.

Again if you ever watched Buffy the Vampire Slayer, you really know all that goes on in this book. The younger vampire slayer has to train and prepare for her destined future as a vampire slayer. She tries to balance her life as a teenage girl going to high school and her new paranormal life.

The book ends with a big cliffhanger. I absolutely hate books that have cliffhangers. Now I bought the book a year after it was originally released but those poor guys who bought the book when it first came out, they had to wait an entire year to find out what happened next. That is just not acceptable.

I think if an author is going to have a big cliffhanger like that, she (or he) should not release the book until she has the second book almost ready and then she is able to release them just months apart. Making readers wait an entire year is beyond ridiculous.

This book had hundreds and hundreds of positive reviews. Oddly I couldn’t find a single one that mentioned that blatant copy of the Buffy the Vampire Slayer story. Maybe it’s because of the target market for this book at teens, as a YA paranormal romance and maybe they just never heard of Buffy.

The one that stood out to me said something like, “Jemma is less dense than most YA heroine’s, but still insanely naive nonetheless.”

That’s true. Jemma just isn’t a strong lead. She’s okay, she didn’t overwhelmingly annoy me. But I also didn’t really care too much about her one way or another. When I read a story I want to really root for the main character. I want her to fall in love with the guy and live happily ever after.

I liked the story well enough, but I really wouldn’t have cared one way or another how her life turned out. She just didn’t make me fall in love with her.

Review of Inception: The Marked

Right now, there are currently 483 others online, just like you!
Menu