Just The Way You Are is a contemporary romance novel by Christina Dodd. This is the first book in the Lost Hearts series. 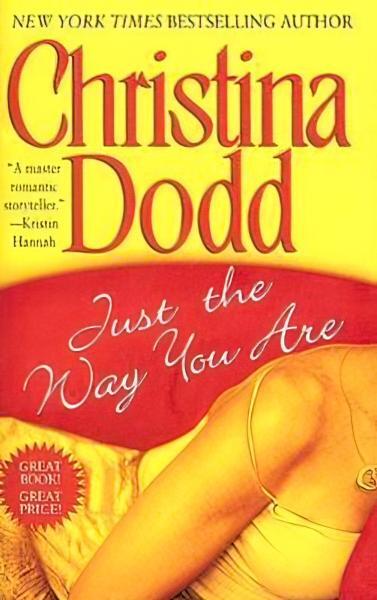 Hope Prescott lives in Boston, far from the warm, southern home she recalls. She works with one goal in mind–finding her long-lost siblings. Yet her job at the answering service and her own loving nature creates a family of friends, people she knows only by their voices. She especially likes Griswald, a gruff old butler for wealthy Zack Givens.

Meeting Griswald is a shock; he is neither gruff nor old, but a powerful, handsome man. In fact, he is Zack Givens, mysterious, cold, heartless–and charmed by the artless young woman who brings him chicken soup, treats him like a friend…and falls in love with the humble man she imagines him to be. Inevitably she will discover Zack’s secret and face his betrayal. Then can Zack solve the mystery that haunts Hope’s past to prove their futures lie together?

GET JUST THE WAY YOU ARE AT AMAZON

When I see a book cover that has the authors name is big, bold letters and you actually have to try and search to figure out what the name of the book is, I can’t help but roll my eyes. Authors like that tend to rub me the wrong way. I don’t know why this bothers me so much, it just does. It’s so pretentious. When I buy a book to read, it’s because I care about the story. It has nothing whatsoever to do with getting to know the author.

That issue aside, let’s talk about the story.

The story starts out slow and I really struggled to get into it. The first chapter was the worst. It was all back story and getting to know the characters. It was just to much. It wasn’t well done. It was too long and overly complicated. The entire setup could have been done in a single paragraph. He’s a powerful businessman, we got it. We don’t need you to drone on and on about it.

Luckily from there, the story improved greatly. In fact, it was as drastic an improvement as any I had ever seen.

The problem is, and this is just me, but when we got into the story, the author named one of her characters Mr. Griswald.

This immediately brings to mind, at least for me, Chevy Chase in the National Lampoon’s Vacation movie. I seriously can’t hear the name Griswald without thinking of Chevy Chase and laughing. As a result, I couldn’t get into the story as much because of the name.

Next problem is the use of “For he”. It’s a strange turn of phrase that even once can seem out of place in a contemporary romance but this author uses the phrase quite a bit throughout the entire book.

For he trembled, For he pushed through, For he tumbled her down on top of him ….

There were quite a few more times she used for he or for she in the book, those were just a few for example purposes. Considering the fact that this comes from a New York Times Best Selling Author, why didn’t this book get better editing?

She also reuses other phrases like “Knocked him ass over tea kettle”. The use of this unique phrase one time in a book is fine, but two or three times, seriously? How did an editor not catch this?

All of that aside, I still liked this story. Was it perfect? Not even close. But overall it was an interesting read with great, likable characters.

Right now, there are currently 179 others online, just like you!