Schooled in Magic by Christopher Nuttall is the first book in The Schooled in Magic series. This is a Young Adult novel that is also part paranormal, part romance.  Well actually the first part of the series isn’t about romance, so that is a little misleading, but it lays the groundwork for the romance to come. 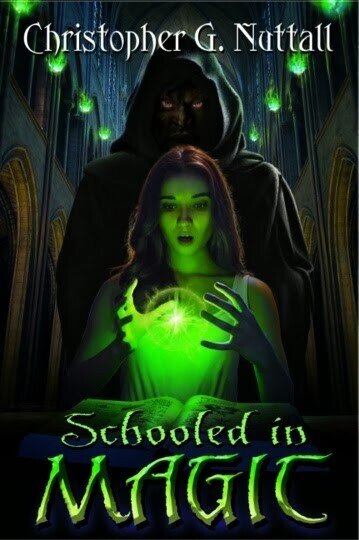 Be careful who you trust, for even the Devil was once an Angel.

Emily is a teenage girl pulled from our world into a world of magic and mystery by a necromancer who intends to sacrifice her to the dark gods. Rescued in the nick of time by an enigmatic sorcerer, she discovers that she possesses magical powers and must go to Whitehall School to learn how to master them. There, she learns the locals believe that she is a “Child of Destiny,” someone whose choices might save or damn their world … a title that earns her both friends and enemies. A stranger in a very strange land, she may never fit into her new world …

…and the necromancer is still hunting her. If Emily can’t stop him, he might bring about the end of days.

GET SCHOOLED IN MAGIC AT AMAZON

Imagine one day you get pulled into a world that is completely unknown. This parallel universe is familiar but oh so different than your own. This world is full of necromancers, witches, and trolls.

This is what happened to Emily. She wasn’t anything special in the real world. She was just an average teenage girl whose mother was to caught up in her recent deadbeat boyfriend to even notice her daughter was alive.

Emily was too quick to learn though that here, in this new world she was different. She had an unknown power that she tries to tap into while at the same time, trying to stay alive.

The necromancer who pulled her into his world to sacrifice her, wanted her back. The sorcerer who helped her escape from said necromancer was a mystery all his own.

Everything in her new world was different but she couldn’t go back. She was stuck in this new place that was strange yet still fascinating.

The sorcerer who helped her escape from the necromancer sent her off to magic school, called Whitehall. There she would learn all about this new world. She would also make new friends and a few enemies.

The world is obviously paranormal but it is also set in the dark ages. It’s interesting how Emily tries to apply all she thinks she knows about her modern day world to people living in medieval times.

The world may be magical but they don’t have some of the most basic things in life – the modern day conveniences that we take for granted.

Now that you have the basic idea of what the story is, it’s time to talk about the things I didn’t like.

There were parts of the story that seemed to drag on.

I liked the book but not enough to make me want to read the second boo kin the series. It was “okay” but it honestly didn’t draw me in. I wasn’t still thinking about the story days after I finished. I was done reading it and that was that. I wasn’t so into it that I had a nice book hangover.

If you aren’t a fan of the paranormal then you probably don’t want to pick this one up. If you are into ghosts and goblins and things that go creep in the night and can pick this up on sale, then it might be worth a read.

Right now, there are currently 12 others online, just like you!