The Werewolf Meets His Match is the second book in the Nocturne Falls series written by Kristen Painter. 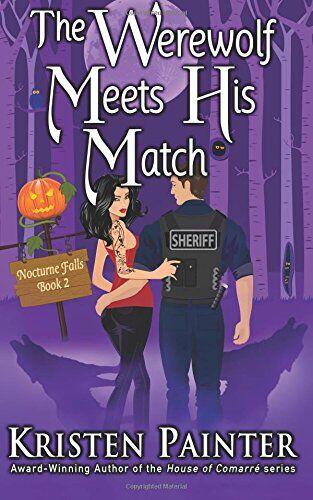 Welcome to Nocturne Falls, the town that celebrates Halloween 365 days a year. The tourists think it’s all a show: the vampires, the werewolves, the witches, the occasional gargoyle flying through the sky. But the supernaturals populating the town know better.  Living in Nocturne Falls means being yourself. Fangs, fur, and all.

Getting arrested wasn’t on werewolf Ivy Kincaid’s agenda when she arrived in Nocturne Falls, but her life rarely goes according to plan. The upside of spending the night in the local lock-up is finding a hotel room is no longer a worry…but the downside is the man she’s come to marry will get his first impression of her behind bars. Not exactly the way Ivy was hoping to meet her pack’s sworn enemy…aka her fiancé.

Sheriff (and werewolf) Hank Merrow is the alpha’s heir. Everything he’s ever done, from becoming an Army Ranger to serving in law enforcement, has been in preparation for the day he’ll take over. Getting married to cement a shaky truce is no different. Hank will do his duty, even if it means shackling himself to a woman he has no intention of liking, let alone loving.  But Ivy is nothing like Hank expected. As feisty as she is beautiful, she’s as determined as he is to make a go of marriage for the sake of peace between their packs. The trouble is, Ivy has secrets that could destroy everything Hank holds dear…including his newfound love for her.

The Werewolf Meets His Match is now available at Amazon

If you would have told me six months ago that I would be reading a Paranormal romance and loving every minute of it, I would have told you that you’ve lost your ever-loving mind.

But you know what? it’s true. I absolutely love this series.

Nocturne Falls seems to live and die by the tourist industry. So to attract visitors they basically made their own into Halloween town and celebrate it 365 days a year. The people who go to visit think it’s all a show but in reality, the town is populated by real supernatural beings that can walk around in public and be themselves, because the regular folks think it’s just a part of the show.

This book really was hard to put down. It’s a lighthearted romance that will leave you hoping to get your hands on the next book in the series asap!

Right now, there are currently 11 others online, just like you!