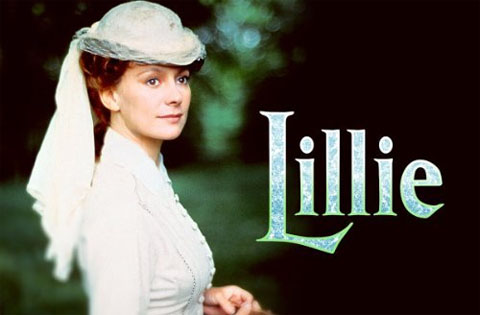 I find myself watching more and more shows from Netflix now that I have a Google TV box.  I seem to be drawn to the genre of the British romance and this week I watched a series called Lillie, which quite honestly I feel would have been better titled The Great Whore of London.

It all began when a British soldier, who also happened to be the Archbishop of Canterbury’s son, was stationed in Normandy, France, and ran into a young lady who caught his attention.  He was surprised to find she was the daughter of the Dean of the Island, which is basically meant she was a preacher’s daughter. Funny that in America we all too commonly see those girls are the naughtiest of them all but in England, she was respected for such a position.   To be the daughter of the Dean of the Jersey Islands was really rather respectable in those times.

Well, it turns out when the solider went to request her father’s permission to court the girl he was met with a rather shocking surprise, as he would find out she was only 15 years old.  He immediately requested a transfer to another post.

Moving forward Lillie grows up and runs into a man, a friend of the soldier whom she had met when she was 15.  His name is Mr. Langtry and he previously was married to a girl on the island but she died of consumption, which apparently was not all that uncommon in those times.

He’s an older man who we would later learn is 8 years her senior, but he has a boat … they call it a yacht but it was more like a big sailboat.  Anyway, Lillie wants to get off the island so she agrees to marry the man thinking he can take care of her and take her away.

She doesn’t know the man nor really apparently cares too much for him but agrees to marry him anyway.  That seems to be acceptable behavior in those days.  Turns out Mr. Langtry was a vile man who was ill-mannered and drank to much.  And it turns out his wealth wasn’t quite as great as he would have had you believe.  He got a small allowance from his family but not near enough to support himself and his young new wife and had to sell off his two boats, one to pay off their accumulated debts and the other to give them enough money to live off of for a while.

While one would think Mr. Langtry would just get a job to support his wife as he did go to Oxford to study law, even if he didn’t take his exams to actually become a real lawyer he has a degree in law from Oxford, that has to be worth something.

But Mr. Langtry seems to be offended at even the idea of working.  He is after all a “Gentleman” and the thought of working just too much.  I guess starving and not being able to provide shelter for your family was a better option.

Mr. Langtry has a house in the country far from London which is where Lillie dreamed of living.    After getting sick she cons the doctor into telling her husband the only way she can really recover from typhoid fever is to move to London.

So Mr. Langtry sells his home, fires all of his staff, and moves to London.

Much to her dismay, for the first 7 months they are there they don’t get a single invitation to a social event.

The rest of the series is about her manipulation of people and her inappropriate relationships.  It basically tells the story of a lady who had no problem sleeping her way to the top and to get what she wants.

The story was horrible and clearly written by a man … and in fact, it was … James Brough, David Butler, John Gorrie.  They would have really benefited from having at least one female writer on the staff but I guess it was the 70’s.

No female would find that kind of behavior acceptable.  When we write stories about romance they are about love or the pursuit of love, not a story about let’s see how many men we can sleep with to get what we want.  And it wasn’t that she slept with people but that her whole moral compass was off.    She had a child that was her toy and the story only got worse from there.

I’ve never seen a series where you so hated the main character.  Usually, in TV shows you want the main character to do well and you cheer for her.  But that is not the case with Lillie.  She’s just a two-bit whore that has no problem sleeping with married men, and degrading women altogether to get what she wants.

Lillie Langtry, trapped in a loveless marriage, takes full advantage of her beauty, attracting many lovers and admirers including the Prince of Wales and Oscar Wilde. As her husband slowly drinks himself to death, Lillie embarks upon a sensational career as a somewhat talented yet beautiful actress in Britain and the United States. Throughout her life she attracts rich and sometimes brutal lovers, endures financial ruin and scandal, yet maintains her dignity, elegance, and a certain amount of her beauty until the end of her life.