Spying in High Heels is a contemporary romance by Gemma Halliday.

L.A. shoe designer, Maddie Springer, lives her life by three rules: Fashion. Fashion. Fashion. But when she stumbles upon the work of a brutal killer, her life takes an unexpected turn from Manolos to murder. And things only get worse when her boyfriend disappears–along with $20 million in embezzled funds – and her every move is suddenly under scrutiny by the LAPD’s sexiest cop. With the help of her post-menopausal bridezilla of a mother, a 300 pound psychic and one seriously oversexed best friend, Maddie finds herself stepping out of her stilettos and onto the trail of a murderer. But can she catch a killer before the killer catches up to her. 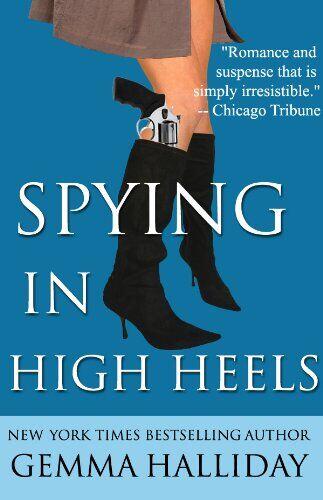 Spying in High Heels is now available at Amazon

When I read a book that talks about flip phones and answering machines, I can’t help but think how dated the material is and that’s why it lost points with me. They published this book in 2012 according to Audible and in 2013 according to Amazon. So since this was a new release why wouldn’t they go through the effort of updating the content before publishing it? Had they put in just the smallest amount of effort, it really would have gone a long way in improving the story.

They classify this book as a contemporary romance novel but to be honest, it’s really less of a romance and more chick-lit or women’s fiction.

I wondered when this book was actually written. I have an idea why I really cared but I was always up for a good mystery so I used clues from the book like “acted like teenagers in a Hillary Duff concert” and the use of a Motorola flip phone to try and narrow down a time frame.

So based on all of this my best guess is that this book was written around 2003. I wondered just how right I was and I did a little digging and finally found an interview where she said “SPYING IN HIGH HEELS was my first sale to a NY publisher, in 2005.” So I was pretty close!

I suppose the odd published dates we are finding are because they pulled the book, did some editorial clean up, and then re-release the book. I had read quite a few reviews which talked about a ton of mistakes in the book, which in my copy I didn’t find present such as “Three days pass, but she calls it 48 hours. The bachelorette party is tonight (as her Faux Dad calls to remind her) and she tells herself she needs to call her best friend and ask her to go with her to the bachelorette party tomorrow night”.

I think that the main character is shallow and extremely judgmental. While some people have found her obsession with fashion annoying, I don’t. I get it … some people are into things like that. I personally am not, but I’m not going to condemn someone who is.  What I do find bothersome about this character is how judgmental she is. Everyone who is remotely pretty is dumb. She wouldn’t even shake one girl’s hand because she’s an adult film star and yet her best friend is super promiscuous who sleeps with anything and everything.

This is book 1 of 10 in the series, two of them actually being short stories.

Right now, there are currently 171 others online, just like you!