Stripped is a contemporary romance novel by Jasinda Wilder. He’s a movie star sex god. She’s a virgin … and a stripper. So how did I get myself into this situation, you ask? Simple: desperation. When you’re faced with being homeless and hungry or taking off your clothes for money, the choice is easier than you’d imagine. That doesn’t make it easy, though. Oh no. I hate it, in fact. There’s nothing I’d like more than to quit and never go into another bar again, never hear the techno beat pulsing in my ears again, never feel the lecherous gazes of horny men again.

Then, one day, I met a man. He’s in my club, front, and center. He watches me do my routine, and his gaze is full of hunger. Not the kind of desire I’m used to, though. It’s something different. Something hotter, deeper, and more possessive. I know who he is; of course, I do. Everyone knows who Dawson Kellor is. He’s People Magazine’s Sexiest Man alive. He’s the hottest actor in Hollywood.

He’s the man hand-picked for Rhett Butler’s role in the long-awaited Gone With the Wind remake. He’s the kind of man who can have any woman in the entire world with a mere crook of his finger. So what’s he doing looking at me like he has to have me? And how do I resist him when he looks at me with those intoxicating, changeable, quicksilver eyes? I’m a virgin, and he’s an American icon of male sexuality. I’m a stripper, and he’s a man used to getting anything and everything he wants. And he wants me. I know I should say no; I know he’s the worst kind of player…but what my mind knows, my body and my heart may not. And then things get complicated. 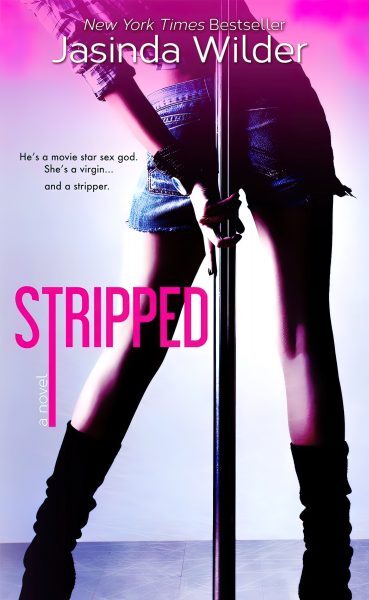 I loved Jasinda Wilder’s book Falling Into You, but I can’t say as much about this one.

Grey, the main female character, grows up in a home with a controlling bible-thumping southern baptist preacher that thinks pretty much everything is a sin. Growing up in such a stifling environment is sure to give someone some serious mental issues.

Now let’s look at the obvious problems with the story … first is that clearly, the person writing this story has clearly never been a stripper and most likely has never even been into one. $5 a table dance. Really? I think if you offered a stripper $5 for a table dance she might kick you in the balls or at the very least laugh at you.

A lot of little things dotted throughout the book make it obvious this girl is writing about a subject matter she has no idea about.

But that issue aside, the person writing this story has some serious moral issues with the concept of stripping and tries to justify it by saying it makes her sick, and she goes on and on and on and on about how she gets sick after every time she dances on stage.

The girl pukes like five or more times a night, four days a week? Seriously? Umm okay. If you have such a problem with stripping, it isn’t a subject matter you should be writing about. Besides the fact that you know nothing about strippers or strip clubs, it makes you look just stupid, and the way you try and say, I know I strip, but I have to for the money, but it’s okay, but it makes me puke. That’s just wrong on so many levels.

Plus, there are ways to express your discomfort with what you are doing for a living with all the puking and crying.

Next, we need to talk about the weight issue. How can you be a 5 foot 9 dancer with a “dancer’s body” and be 140 pounds? How can you do all that dancing as a stripper, and trust me, there is a lot of physical activity in dancing like that, and skip all those meals and still be so heavy? Okay, 140 pounds isn’t fat city or anything, but it’s a tad bit on the bigger side. You aren’t eating so little, being so phonically active, and weighing that much. I’m sorry, but someone clearly needs to do their homework about weight. You can’t say she’s hot and has this great “dancer’s body” when on the other hand, you mention how she is 140 pounds.

So many little problems like this bring you out of the moment, and that’s really the main problem with this book.

It didn’t surprise me in the slightest to read “Editing by Indie Author Services.” This book could have really used some cleaning up. For example, did nobody in editing catch the 17 times she said her skin burned where he touched me?

It wasn’t a bad book. But it also wasn’t a great book. I think the book could have been much better with some heavy cleanup by a professional editor. Parts of the story dragged on far longer than it needed to.

Right now, there are currently 167 others online, just like you!