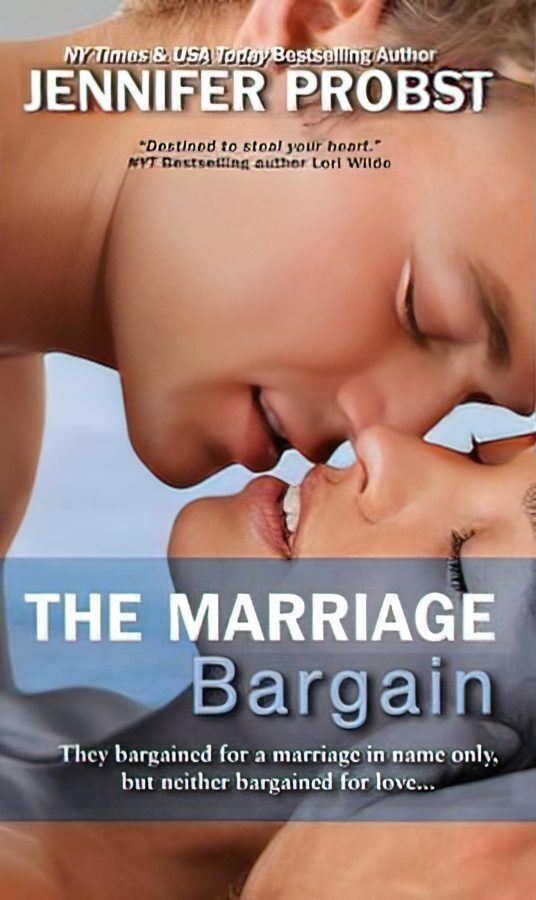 Review of The Marriage Bargain

The Marriage Bargain. A marriage in name only . . . To save her family home, impulsive bookstore owner Alexa Maria McKenzie casts a love spell. But she never planned on conjuring up her best friend’s older brother—the powerful man who once shattered her heart. Billionaire Nicholas Ryan doesn’t believe in marriage but needs a wife and one fast to inherit his father’s corporation. When he discovers his sister’s childhood friend is in dire financial straits, he offers Alexa a bold proposition. A marriage in name only with certain rules: Avoid entanglement. Keep things all business. Do not fall in love. The arrangement is only for a year, so the rules shouldn’t be that hard to follow, right? Except fate has a way of upsetting the best-laid plans . . .

The Marriage Bargain is now available on Amazon

Nicholas Ryan seems to have it all. He is young, good-looking, insanely rich, and smart. Only there is a problem. Looks can be deceiving. Through his facade of perfection, there is a truly broken man or so begins the story of The Marriage Bargain. The story is one we’ve heard before.

Boy needs a wife to get an inheritance, makes a deal for a fake marriage and falls in love for real with the wife. But sometimes, a good story is worth repeating, which is one of those times. Minus a few annoying habits of the author, I found myself truly enjoying one of the best-selling romance novels of 2013.

The few problems I had with the book were simply based on my problem with the author. To be honest with you, I felt really sorry for her when I read the entire trilogy. I came to realize that while Jennifer Probst may write about romance and real passion, she clearly doesn’t know it in her own life. Romance novels should be about fantasy, something we really want to happen in our own lives, so who in their fantasy world fakes O’s and pretends they are real? I mean, maybe she doesn’t really know how it feels.  While I’m sure many of her readers will buy the story at face value, anyone who is in tune with her body and has had the real thing will see right through it. Jennifer Probst is a person who doesn’t get it. This author has never really been there, done that. And that just makes me sad.

My other problem with the book and the trilogy was a few other female facts she got wrong. I think the author was trying to find a creative way to express arousal but to hear her speak about certain things so beyond inaccurate just makes me cringe. So just in case she doesn’t understand, a female’s breast doesn’t swell when we are turned on. The male private parts may do that, but a woman’s breasts only swell due to hormonal changes directly related to the reproductive cycle. I looked into this for a bit, and I can assure you that I have found not a single case of a female’s breast swelling or growing in size simply because she got turned on. That just doesn’t happen. And the last complaint I have, or annoyance, is the nipple thing. Damn, if this woman isn’t obsessed with nipples and insistent that they are just like a male private part and get hard, every single time no matter what, like a man.  While I didn’t count, I would venture to guess she mentioned this nipple thing at least 50 times throughout the three books. Seriously … don’t know what your obsession with nipples is, but damn, enough with the nipples already.

There is also one more thing I should compliment the author of this book on, well … her entire series. This book and every book in the story have a nice, clean ending. While obviously, this book will lead to another and then another, she doesn’t end each of the books in a cliffhanger. That annoys me greatly, and far too many authors are doing that today. I get it, you want your book to be a Twilight trilogy. Great. Whatever. But you can still write more about your book and provide your readers with a satisfying ending. A cliffhanger isn’t the only way to end a book. Jennifer Probst proves that.

Borrow it. This book was okay, but I can’t imagine I would ever re-read it.

Review of The Marriage Bargain