The Marriage Trap is a contemporary romance by Jennifer Probst. It is part of the Danvers series.

To satisfy his late father’s wishes, hot and single billionaire Michael Conte must find a bride—someone who will fit into his traditional family back home in Italy—and fast, so his engaged sister will be allowed to wed. With no intention of being tied down, Michael “proposes” to fiery, free-spirited photographer Maggie Ryan: if she plays the part of his fiancée during her trip to Milan for a photoshoot, he will keep away from her married best friend, Alexa, and stop making Maggie nuts with their too-close-for-comfort flirtations. But once in Italy, sexual tension sparks the hottest no-strings-attached arrangement on any continent. Could marriage be the most enticing trap of all? 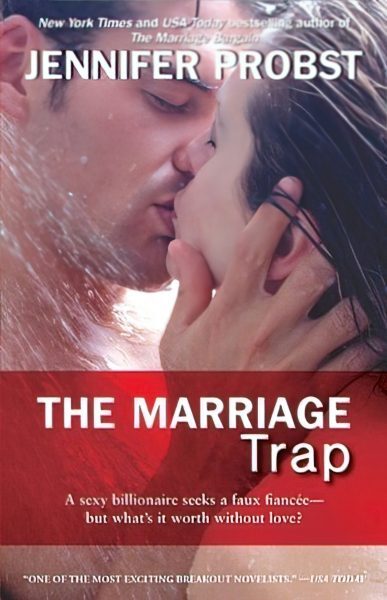 The Marriage Trap is the second book in the Jennifer Probst married to a billionaire series. This story follows Maggie Ryan, who you met in the first book. She’s the sister of Nicholas Ryan and the best friend to Alexa. In this story, Maggie went on a date arranged by her friend Alexa with Michael Conte, a business associate of her brothers. The date doesn’t go well. Maggie really liked him, but he blew her off. She assumes it is because he is in love with her best friend and sister-in-law, Alexa.

Later on, Michael finds herself in a situation where he needs her. He needs a fake wife to take home to Italy with him to meet his family. She has to go there anyway for her job as an international fashion photographer, so she agrees but only on one condition, he never talks to Alexa again. She figures if she does this for him, she can at the very least save her sister-in-law / best friend from being hit on by this guy and save her marriage from any potential troubles. The story really picks up when they get to Italy and meet his family.

Overall, it was a better book than the first and ties in perfectly with the next book in the series.

Right now, there are currently 13 others online, just like you!