Wallbanger is a contemporary romance novel by Alice Clayton.

The first night after Caroline moves into her fantastic new San Francisco apartment, she realizes she’s gaining an—um—intimate knowledge of her new neighbor’s nocturnal adventures. Thanks to paper-thin walls and the guy’s athletic prowess, she can hear not just his bed banging against the wall but the ecstatic response of what seems (as loud night after loud night goes by) like an endless parade of women. And since Caroline is currently on a self-imposed “dating hiatus,” and her neighbor is clearly lethally attractive to women, she finds her fantasies keep her awake even longer than the noise. So when the wallbanging threatens to literally bounce her out of bed, Caroline, clad in sexual frustration and a pink baby-doll nightie, confronts Simon Parker, her heard-but-never-seen neighbor. The tension between them is as thick as the walls are thin, and the results are just as mixed. Suddenly, Caroline is finding she may have discovered a whole new definition of neighborly. . . . In a delicious mix of silly and steamy, Alice Clayton dishes out a hot and hilarious tale of exasperation at first sight. 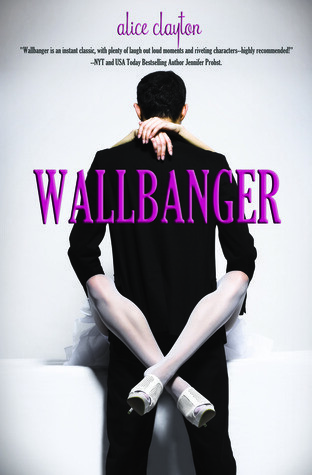 USA Today called this book a best-selling, hot, and hilarious eBook. New York Times called it an instant classic. This little book had over 1,700 Amazon reviews and nearly 30,000 ratings on GoodReads, all mostly positive. I mean, how can I go wrong, right?

Well, if anything, this book taught me that I apparently don’t agree with the reviewers at the New York Times or USA today or all of those fine folks over at GoodReads. This story revolves around a girl who the author wants you to think is fierce and independent … so much so she has total control over her “O”, as she calls it over and over again throughout the course of the book. Her main problem is that her “O” has gone, and out of sexual frustration, she hasn’t been able to get off in a long time. She goes on and on and on and on and on and on about this. HELLO???????? HAS THIS WOMAN NEVER HEARD OF A MAGIC WAND?

Was the book funny? Yes, in a way, but not as funny as some people have claimed it was. It had a few LOL moments, but it wasn’t like I was watching an episode of Seinfeld or something. Was the banter witty? Yes. I will give you that.

There were a few things that bothered me a lot about this book – annoyed me more than “bothered.” First and foremost was the attempt to justify his man whoring. I get that some men are man ho’s, and I have nothing against it, but to try and actually justify it to make him more likable was beyond laughable. There are a few ways she could have gone with that whole mess to make it far more realistic, but she didn’t go that way. Beyond that, we come into the issue with her “0”, erm, I mean her “O.” For the love of all things holy, how did this supposedly modern woman not know of something like the Hitachi Magic Wand? Who the hell would go six months without considering using some toys? I’m sorry, but it’s just a ridiculous plot point to me. But more than the plot point, she seems to be determined to make her “O” a personality all its own. That kind of bothered me, and it kind of made me sad for the author, like maybe she really didn’t get her body enough that maybe these concepts really were confusing for her.

Certain phrases were fine, but why must the author repeat them so often? I mean, do we really need to hear “the small of my back” 23 times in a single book?

Another thing that bothered me was that she spent all of this time in her book talking about her “0”, so when it came time for the two of them to finally have relations, you would think she would give more than a G-rated discussion of it.  Seriously? You can go on and on about wanting to get off through the entire book, and yet when you actually do have sex with the man of your dreams, you can’t discuss it in more than schoolgirl terms, calling her vag her “who-ha.” Then about a chapter later, you find they didn’t actually have sex in the first place; they just slept together in a big bed. Okay then.  A lot of the book was confusing in that way.

Okay, a lot of that was probably a little harsh. After all, the book has some good moments and isn’t that bad. It made me laugh out loud a few times, and the book’s end was nice. I just was so busy feeling really bad for the author that it distracted me from my ability to truly enjoy the book.

Borrow it. This book was okay but really doubt I would ever feel the need to re-read it.

Right now, there are currently 970 others online, just like you!
Menu