Girl, let’s talk Bama Rush. It has all but taken over TikTok this week, and I want to help you understand what it is.

#BamaRush is short for Alaman University Rush Week. Watching it has become a worldwide sensation. While pretty much every university has one or more sororities, the University of Alabama has the largest. If you are watching Bama Rush tok, you’ll learn all sorts of new words like …

There are nearly 40,000 students who attend the University of Alabama, and about 30% of the entire study body is a fraternity or sorority member. Yes, that means one out of every three students are part of greek life.

What are the qualifications to join a sorority?

Alabama Panhellenic Association (APA) oversees most sororities at the University of Alabama. To be eligible to join an APA sorority through the Primary Recruitment process, you should:

Where can you find those glitter fringe skirts?

Now let’s talk about those glitter fringe skirts you see in almost all the #BamaRush videos on TikTok. Those are available from Amazon in every color you can think of. They are actually belly dance skirts. Aren’t they the cutest? 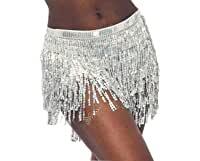 If you’ve been keeping up with Bama Rush Tok, then you’ve no doubt seen them in like every video. Here’s a #bamarush video with the girls wearing the gold version of the skirt.

How much does it cost to join a sorority?

It is insanely expensive to join a sorority. In addition to all the things you need to be a part of the sorority (like all those clothes), you will have to pay $4,170 to $4,978 the first year and then an additional $3,600 to $4,575 each additional year if you don’t live in the house.

These include the chapter meal plan, chapter fees, and one-time fees associated with pledging and initiation.

Now keep in mind, if you aren’t living at the sorority house, you will live in a dorm room, which costs a lot of money as well.

A dorm room at the University of Alabama was $5,900 in 2020, and the cost of a typical dining plan was $3,936. Housing costs vary by chapter, but the price of living in a sorority house is often much less than living in a dorm.

How many sororities are at the University of Alabama?

There are a total of 24 sororities at the University of Alabama. The ones that you hear so much about from TikTok are the 19 sororities from the Alabama Panhellenic Association.

While every school is different, at the University of Abalama, there are three governing bodies when it comes to sororities. These are the organizations that make up and enforce all the rules for sororities and their members.

What is the most popular sorority at the university of Alabama?

This is a hard question to answer. I mean, most popular is really such a subjective term. But I did some research, and apparently, it’s broken down based on old row and new row. Which basically means the old row (the original sororities) and the new row (new sorority houses).

All of this is not ordered within the tiers because it’s up to personal preference.

Of course, this is all highly disputed by anyone and everyone who has ever been in a sorority. But it was the best I could find.

A LOT has changed since this was posted two years ago. Internal drama, grades, and recent scandals.

So to answer your question, which sorority is most popular? I don’t know. Instead, try and pick one that is best … as in best for you. You want a sisterhood made up of people with whom you have things in common.

Don’t rush a house you think is a top house. It won’t be worth it in the long run. Rush a house that has people with similar interests and values.

Take some time before you go into rush and think about the kind of girls you want to be surrounded with. Know what you want out of the sorority. If you love to party, then don’t pick a sorority that doesn’t drink. If you are all about academics, choose a sorority like that.

What is a rush bag?

A rush bag is simply a bag that includes everything you might potentially need during rush week. This includes but is not limited to a portable fan (it is hot out there after all), toiletries, makeup, and a tide-to-go pen in case you get a stain on something. Then you have other things like wet wipes, sunscreen, extra socks, your favorite lip gloss, a portable sewing kit, and anything that you might possibly need in a pinch.

What is a legacy?

You often hear about legacies when people are talking about sororities. If you are a legacy, that means you had a family member who was previously a member of that sorority. You can even be a triple legacy, which means you’ve had three members of your family in the past attend that same sorority. However that being said, while it can help you feel more connected to a sorority, it doesn’t mean that you’ll get in based on that. In fact, there are triple legacies girls who get rejected from a sorority for one reason or another. In short, being a legacy doesn’t guarantee you anything.

How big is a sorority house?

Many people are surprised to learn just how big a sorority house can be, especially at a school like the University of Alabama. They are mansions with a full-on staff. In fact, they are about 40,000 square feet. Yes, you read that right.

The Gamma Nu chapter of Kappa Kappa Gamma boasts one of the biggest sorority houses in the United States, clocking in at 46,350 square feet.

So now you know more about #BamaRush, what do you think? Love it or leave it? Tell me what you think in the comments down below.

Right now, there are currently 227 others online, just like you!