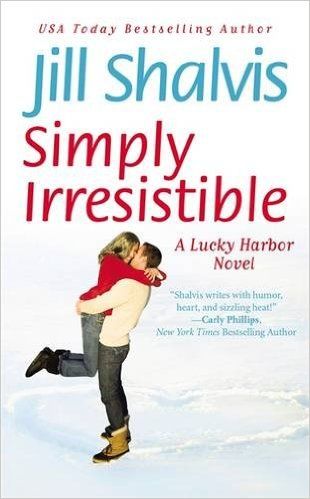 GET SIMPLY IRRESISTIBLE AT AMAZON

Sometimes you stumble upon a book or in this case, a whole series that is just incredible. This is the book that introduced me to the first author that I put on my auto-buy list – meaning anything she puts out, I automatically buy it. She really is just that good.

The Lucky Harbor series starts off as a trilogy, the story of three half-sisters who come together when their mother died. Each of the first three books deals with one sister, finding her true love, while they rebuild their lives and the relationships with each other.

The first book is about Maddie, who grew up in LA with a father in the movie business. Due to a series of unfortunate events, her career had sort of taken a nosedive recently and this trip to Lucky Harbor was a much-needed break from reality.

I think what she didn’t expect, especially coming from such a big city like Los Angeles, was to truly love the small town and all the people in it, including a sexy contractor named Jax. Let’s just say lots of sizzling heat between them!

My only complaint is that the e-book is incredibly overpriced. Despite the fact that this book came out almost 7 years ago, the e-book is actually higher than the cost of the hardcover.