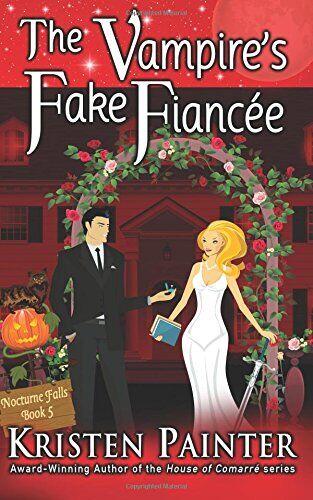 Review of The Vampire’s Fake Fiancee

The Vampire’s Fake Fiancee is the 5th book in the Nocturne Falls series written by Kristen Painter.

The tourists think it’s all a show: the vampires, the werewolves, the witches, the occasional gargoyle flying through the sky. But the supernaturals populating the town know better.  Living in Nocturne Falls means being yourself. Fangs, fur, and all. Sebastian Ellingham isn’t known for being a happy vampire. And when his long estranged wife returns expecting to pick up where they left off, things take a sharp turn toward cranky. Sure he’s been protecting her for centuries, but her assumption that he’s still available (he is) rankles.

His answer is to hire a woman to play his fiancée. The lucky victim is Tessa Blythe, sister of one of the town’s deputies, librarian in need of a job and, oh yes, reluctant Valkyrie. Playing along with Sebastian is all about the end game: earning the position of Dean of Library Studies at the local private academy.  When unexpected sparks fly between them, they agree to mutually deny the attraction. Fate, however, has other plans.

GET THE VAMPIRE’S FAKE FIANCE AT AMAZON

This story started off a little slow. It brings us back to the characters in the first book in the series, The Vampire’s Mail Order Bride. The story deals with his brother, Sebastian who handles all the money for the family and the town itself.

Most people think he’s a stuffy jerk but when his wife returns after being gone for 400 or 500 years, he’s had enough. He’s tired of being used by her. He wants his wife to appreciate him for the great guy he really is. So, of course, he comes up with a story about having a fake fiancee to make her see what she’s been missing.

In comes the sweet librarian. Only she’s no pushover. She’s also a Valkyrie who has been fighting who she is her whole life. The author has a way of making this truly unbelievable and what could be an otherwise all-out crazy story, realistic and lovable.

It’s a very cutesy kind of story that will put a smile on your face that I highly recommend.

I actually love all of Kristen Painter’s books in the Nocturne Falls series.

Review of The Vampire’s Fake Fiancee

Right now, there are currently 11 others online, just like you!
Menu